So today I want to come at you with something a little different. Normally on Fridays I bring you content designed to help you grow some aspect of your blog or social media presence. Instead of specific tips today though, I wanted to cover the growing assumption that social media influencers are entitled brats. I really felt drawn to covering this topic, and hopefully this can clear up some misconceptions for new influencers as well as the general public. So, are social media influencers entitled? 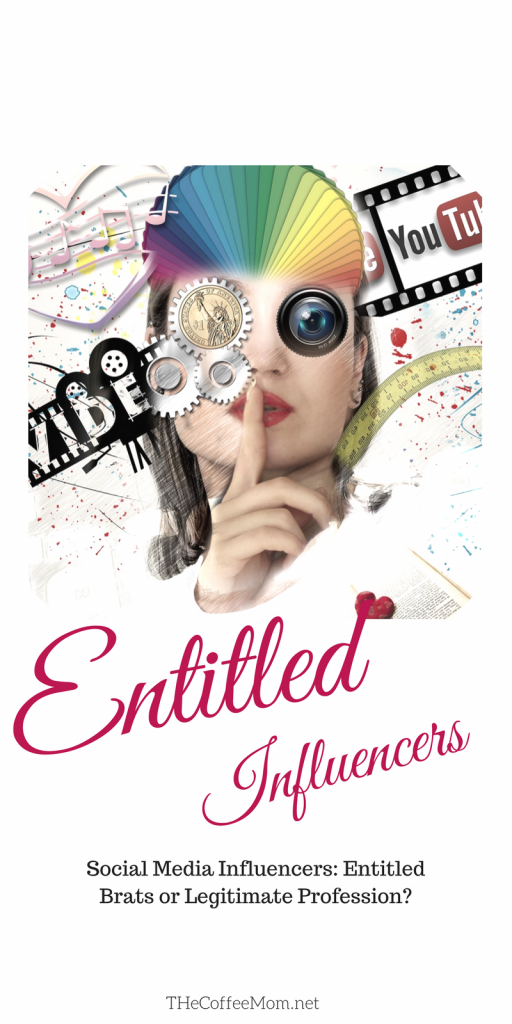 A few weeks ago, there was the “bloggergate” scandal. Many of you may have heard about the influencer who contacted the White Moose Cafe and created an internet riot. The cafe owner publicly embarrassed the girl, and hoards of people came rushing to his support. It seems, that many individuals who do not work in this industry, just do not believe that social media influencers have “real jobs”. Numerous times over the past few weeks, I have seen where people are saying influencers are entitled, they are brats… and the list goes on. While this seems to be a popular opinion of many, the truth of the matter may be quite different than how it is perceived.

Why Are Influencers Perceived As Entitled?

Let’s start out with why there is this perception that social media influencers are entitled to. First, I believe that with the rise of certain YouTubers and influencers, the general public is now starting to view all of us as the same. Yes, certain individuals are downright rude and obnoxious, but does that mean we are all like that? With the growth in influencer scandals of late, it is easy to see why some people think we are all the same. But wouldn’t that be the same as saying all attorneys are slimy sharks simply because some of them are? You see, the comparison is not fair because one group of bad apples does not define the majority.

Not all vloggers are the Pauls. This may be hard to grasp for many, simply because they have such a large platform, but I promise that the vast majority of vloggers, bloggers, and influencers are in fact NOT entitled brats.

Another part of the reason that many influencers are seen as entitled is that most people only see one side of the story. A regular person scrolling Instagram will only see these beautifully staged photos put out by influencers as part of a marketing campaign. They see the beauty, the free product, the money, and the lifestyle. With what they see, they get this perception that influencers just get free stuff, free hotel stays, etc, and don’t have to really work.

They hear about influencers reaching out to companies, and think this makes them entitled. They see that many influencers do not go to a 9-5 job and think they are lazy freeloaders because of it. Scandals, like the White Moose incident, really thrust influencers as a whole into the limelight and people create their opinions based on a small handful of incidents.

What The Public Does Not See

So now that we know what the general public sees, and why many influencers are viewed as entitled, we can discuss why this is in fact not true.

For one, what the public sees is only a small portion of what goes on in the life of an influencer. In reality, there is much more going on behind the scenes. For one, Influencers do quite a bit of work. It is not just getting free stuff and taking pretty pictures. There is a lot of effort that goes into staging photos and getting good lighting. We are expected to be expert photographers and videographers, so we have to put a lot of time and effort into these skills in order to get work. Then there is the editing. Editing photos and videos can take hours to get right. Videos, I have found, take much longer since you have to edit, render, upload, and double-check. It is time-consuming, to say the least.

Then there is writing. Many of us have blogs as well. Writing a well-crafted post also takes time and effort. It isn’t something that is just slapped together and thrown up. We want to tell a story. Highlight the product in a natural way. Show our readers how we feel about the product and why they will love it as well. Brands go to influencers, in part, for their storytelling ability, so just throwing up a random half-assed post is not going to do you any favors.

We are also seen as asking for free stuff. Well, that is and isn’t true. While yes, we do reach out to companies, it is not really for ” free stuff”. We reach out to these companies in order to build a business relationship with them and collaborate for marketing purposes. In this case, we are exchanging goods for the benefit of BOTH parties. So no, it is not just ” send me some free stuff”. It is much, much more in-depth than that.

The Future of Influencer Marketing

For the people who just generally dislike influencers, I am sorry to say that we aren’t going anywhere. This is a growing market that will only continue to expand. Not only is influencer marketing less expensive than traditional marketing, it is also becoming more effective as well. People trust their favorite YouTubers, they feel like they know them in a way. According to studies, people are more likely to purchase on the recommendation of an influencer, or because they saw something on social media than based on traditional marketing.  Don’t believe me about the future of influencer marketing? Take a gander here at all of this research!

Hopefully, I have been able to shine some light on the lesser-known side of influencer marketing. I promise, the majority of us are not entitled brats and we work extremely hard to provide for our families. If you have any feelings or thoughts on this, I would love to discuss this further in the comments below. So what do you think, are influencers entitled millennial brats, or is this a “real job”?

[…] you have created your social media platforms you will notice regular customers liking your posts. Research when your customers are […]

Is this really "an issue"? Sound rather contrived and adolescent.

Looooove this. So many people are quick to judge the influencers who are getting free product, but those same people aren't upset over the fact that a lot of the time influencers get asked to promote products without any mention of compensation! Lots of work goes into social media marketing that many aren't aware of. Thanks for the post!

Totally! A lot of people don't realize how much work goes into it! It isn't just "free product" we have to work for it by producing content and photos and videos.. It is a job

Anyone working in marketing, real professional marketing, realizes the true benefit to working with influencers. Or they should! We definitely aren't going anywhere but it's a bummer we have to fight for this position.

While not all influencers are "Pauls", there are many "big names" who are making the rest of look bad. There are a lot of us hardworking influencers out there who don't act entitled, don't use clickbait or stunts to get attention. It is a shame when those bad eggs make the rest look bad and it seems to be happening a lot. Influencer marketing isn't going anywhere, it is only growing, which also means we have to do a better job to support each other, treat brands, PR companies, and our followers with respect, while also doing our part to educate people on what we do and call out those who aren't serving the community as a whole.